FFM Threesomes: What to Do With the Other Woman 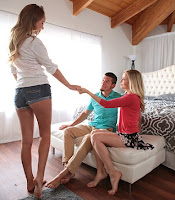 Even if you’ve had lesbian fantasies, being sexual with another woman be awkward, or even intimidating, if it’s your first time. It’s one thing to fantasize, but it’s quite another to have a naked woman in bed with you. If the other woman is experienced, you could let her take the lead, but it isn’t fair to put everything on her. If you are ready and willing, but are not quite sure what to do, here are some suggestions:

2) Play with her breasts.

Once the clothes are off, one of the first things you’ll notice are the other woman’s breasts. Go ahead and touch them. Do more than that if you’re so inclined. Play with them the way that you like yours played with and see how she reacts. As a bonus, the man may learn something by watching how you two go about it.

Tribadism, or tribbing, is a sex act in which a woman rubs her vulva against her partner’s vulva for sexual stimulation. It’s not as commonly done as fingering and oral, but it can be fun. One position in which to do this is called scissoring. Sit down facing each other, spread your legs, and scoot toward each other until your vulvas meet. Move your body back and forth to rub your clitorises together. Many women prefer tribbing in missionary position with one woman on top of the other. In this position, you not only have vulva-to-vulva contact, but full-body contact as well.

Feeling another woman’s vulva for the first time can be thrilling. Start out by playing with her the way you play with yourself and see how she likes it. You may not have touched another woman’s vulva before, but you have touched yours, so you have a good idea about what feels good down there. You don’t have to put a finger inside her, but once she’s turned on and wet, she will probably want you to.

My book Lesbian Sex Secrets: How to Have Amazing Sex With Another Woman aims to help bi-curious, bisexual, and lesbian women take their sex lives to another level. To give your lover  the best sex she’s ever had, starting tonight, click here!
Posted by Svetlana Ivanova at 5:00 AM