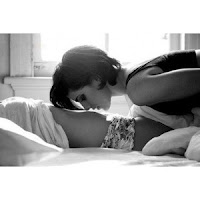 First, put some saliva on the clitoris to make it wet if it it is not slick already. Then wrap your lips around her clitoris and move it around the roof of your mouth with your tongue.

If your lover has a larger clitoris, purse your lips and move up and down on it like giving a blow job. If her clitoris is smaller, use the lips of her vagina and suck on them like a blow job and finish on the clitoris.

As you stimulate her clitoris with your tongue, try not to use the same technique for too long as this can become boring. Vary your techniques while paying close attention to your lover’s reactions. However, if you find a technique that she seems to be strongly responding to, stay with it until you bring her to orgasm.

My book Lesbian Oral Sex Secrets: How to Give Great Oral Sex and Make Her Orgasm Every Time includes numerous tips and techniques that will skyrocket your oral sex skills. To give your lover the best oral sex she’s ever had, starting tonight, click here!
Posted by Svetlana Ivanova at 5:00 AM